The OHL and NCAA seasons are now on hold for the holidays, here’s a look at how our guys have done so far this season: 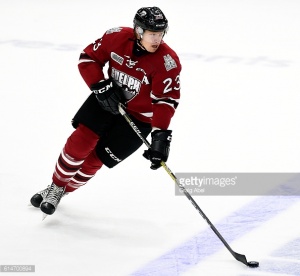 Matt, now in his 3rd season with the Storm, is having his best season of his OHL career. Although his Storm are not having a great year, Matt is showing promise as he has improved in every statistical category.

Justin (the first captain in Bulldogs history) is having a great year offensively, scoring an average of 0.55 points per game. The Bulldogs got a bit of a scare last year when Justin suffered a very serious leg injury, but their captain has bounced back and looks to be better than ever.

Jack, more known for his steady play in his own end, has notched an impressive 9 points this year. Anytime a stay at home defenseman can contribute at the opposing end of the rink it’s a bonus.

This is a big year for Jonah as he is set to enter the NHL draft at seasons end. After a hot start to the year Jonah suffered a minor setback in the form of an injury. Since his return to the lineup, he has potted 20 pts in 15 games, increasing his points per game average to a very respectable 0.93.

Jacob, never one to shy away from the corners, is having himself an impressive campaign. The now LA Kings prospect has stepped up this year, through 32 games he is +13 with 44 penalty minutes and has chipped in on offense as well with his lone goal coming on the power play.

Kyle signed on with Saginaw right out of training camp. Although he hasn’t been able to break through offensively, Kyle should take solace in the fact he has play in 30 of the Spirit’s 33 games this year. As with most rookies, this year will offer many learning experiences, and Kyle will certainly be a better hockey player for it.

Bobby entered his final year in the OHL without a pro team to call his own. However, he can expect teams to be knocking down his front door after the results he’s produced so far this season. Bobby has already surpassed his point total from last year (48) in almost half the number of games. He has 2 less goals then he got in 2015-16 while taking 28 less shots. Bobby shouldn’t have any problems finding a pro contract this offseason.

Barrett has posted modest offensive numbers thus far, however he is a +6 which is no easy feat for a rookie. He is also winning 53.3% of his face-offs, another impressive stat for a rookie.

Mike and his Colgate teammates head into the holiday break with a 2-4-1 in-conference record and sit 4-9-4 overall. You can bet that Mike, the fiery competitor that he is, will return after the break on a mission to help his squad climb back up the ECAC leaderboard.

Dylan is having a breakout season at Northeastern. He is currently sitting one point behind his total output from last season and has played less than half the games. Lookout Hockey East!

An alternate captain in his senior year, Evan is on pace to match his point totals from last season. With the Pioneers sitting at 4-8-0, Evan and his teammates have some work to do after the break.

It took a little longer than Jacob hoped, but once he cracked the line-up there was no looking back. Since suiting up for the Blue Devils, Jacob has recorded 5 points in the last 6 games heading into the break.